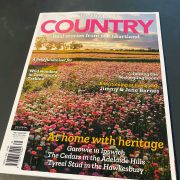 Western Australian farmers Jen and Rob Warburton turned their everlasting flower crop into a force for good with an inspirational fundraiser.

The adage that when the going gets tough, the tough get going could have been coined for Western Australian sheep and grain farmers Jennifer (Jen) and Rob Warburton. As newlyweds in 2000 they were challenged by a double whammy of Jen’s diagnosis and setbacks with Multiple Sclerosis (MS)and Rob’s diagnosis and treatment for Hodgkin’s lymphoma.

While both could have been forgiven for crawling under the doona and remaining there forever, they took it in their stride, enduring treatments, which involved arduous 600-kilometre round trips to Perth from their farm near Kojonup in WA’s Great Southern region. Family rallied and helped with seeding while Rob underwent chemotherapy and he was lucky to emerge from a tough six months of treatment with his health regained. Then the couple faced another set of challenges as they faced the rigours of IVF and finally welcomed daughters Lucinda, who is now 19 and Zara, 15, into the world. As if that weren’t enough to deal with, last year Jen was diagnosed with stage four breast cancer and underwent surgery and chemo, which only ended in February this year. In the middle of all this, Jen still deals with MS with regular medical and physiotherapy appointments, and a gradual decline in her mobility, which means that she now needs a Zimmer frame to walk and relies on Rob’s constant presence if she has to walk unaided.