Soil nutrition is responsible for Everlastings that look full, tall and bright. Soil nutrition is also responsible for wheat crops that look healthy and yield well. The formula is the same, they require potassium and nitrogen and a small amount of phosphorus to grow their best. Most native plants love potassium and nitrogen so these are two elements you really require.
It is best to plant your Everlastings into your well prepared soil. Plant your seed with a little amount of fertiliser, calculate the correct amount, as too much can lead to fertiliser toxicity. Dig the fertiliser into the top 5 cm of the soil for vigorous germination and to get the best start for the crop.
At about the six-week stage after planting, Everlastings will be starting to grow quite vigorously, requiring a top-up in nutrition. It is a good time to add some nitrogen at this point. This will ensure a good display in the spring, of nice tall, plump flowers with bright blooms. The nitrogen should be in the form of Urea, or a form from your Nursery or Garden Centre. Don’t put it on too late otherwise it won’t add to the everlasting plant at all.

Everlastings can be sown at any time of year, if you have the water supply. It is not recommended however, to plant during the hot summer months as any germinating plant will struggle. It is best to plant during a normal growing season from April-May through to August.
If you plant in Feb-March and supply optimal nutrition, there is a chance the plants may become top-heavy and fall over with the weight of the flowerhead. If you plant after March-April, plants will be more able to hold their weight, as there is not enough growing season time for them to grow too tall.
Alternatively, if you plant in September, the plant has to grow very quickly in order to flower at the normal time in spring. The later you sow, the shorter they will grow. Sowing late is best for sowing pot-plants, because often you do not want them to become too ‘leggy’, producing more plant than flower.
Additionally, the later into the growing season they are seeded, the longer they will take to germinate and come out of the ground. This is particularly true for winter planting, because the soil is colder and less conducive for a seed to become active. Sowing in the warmer autumn months, a seed can become a seedling in about two days! In the cold of winter, this can extend to 10-14 days. They will all come up eventually… be patient!!
Of course, Australia is a vast land, with different climates, and the time of sowing should be altered to be conducive for seeding an annual temperate plant. Frost will not hinder Everlastings, so this is something you do not need to take into consideration when determining sowing times. 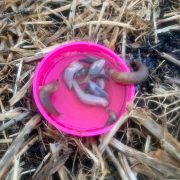 Everlastings, like any plant grown from seed, are highly susceptible to pests. Slugs and snails are the most problematic, followed by  rabbits. The best method is prevention. Be aware of the pests you may encounter and take steps to eliminate predatation.

If you have a garden with snails and slugs then you WILL need to apply one of the following;

Iron phosphate pellets. These are not as effective as the slug pellet because the snail / slug has to ‘stumble’ across them, rather than be attracted to them. You will have to apply more iron phosphate pellets; however they are also not very expensive and no harm is caused to animals.

Non-chemical. Home remedies. These may include a beer trap (the slug is attracted to the beer and drowns), eggshells in your garden, slug repellent, using bran or gravel around the garden, and placing fly wire over your site so snails cant traverse. For further information regards natural methods of slug control – aumanns.com.au).

REMEMBER, slugs come at night, so often they are undetected as the cause of your loss of seedlings.

Mites are a huge broadacre issue, using chemicals is the best method to control. These come in two forms – a synthetic pyrethroid chemical which is quite harmless to humans and animals, and organophosphate which is very effective, but can cause problems with toxicity in the long term.

There are indirect natural ways of dealing with mites, for example, companion planting, and planting species that will lead to common insects controlling the mite or the use of eco oils.

DON’T TREAT mites unless you have them!! They can very quickly become resistant to control methods.

Very hard to control!, but fortunately the taste for everlastings is an afterthought and they will preferentially graze other species first. Therefore, the best method of control is removal by baiting or other method, or encouraging them to eat something else (grain or hay). 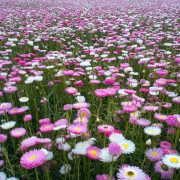 Weeds in any farming situation, are the NUMBER ONE consideration. In broadacre agriculture the research and funding placed into developing new chemicals and methods is substantial, so progress is fast, however with growing Everlastings, these recommendations are not available.. so it is a little bit of trial and error!

Everlastings are in the family ‘Asteraceae’, which is the same family as Capeweed. Capeweed is the nemesis to the Everlastings, because it produces the same fluffy white seed, and as different to the Everlastings’ upright nature, it smothers and forms a large taproot to obtain all the available ground and nutrition. It is used in some countries for its ability to dominate, and cover bare soil.

Capeweed cannot be controlled by chemical methods within an everlasting crop. The only method of removal is mechanical, using a shovel, or hand pulling the weeds. Of course, the other method,  is to control capeweed and other weeds, BEFORE the everlasting crop is even attempted. To do this, after the opening rains (or using irrigation), you can either fallow the site, keeping the the site bare and removing the germinating weeds until weeds are in small numbers… or chemically spray the site. If your weed burden is still large, it may be worth waiting a little longer for further germinating weeds, and repeating this control method, ensuring the most success, then plant!

Remember: Weed control is number one!!

There is hope for controlling grass weeds in Everlastings. Most chemicals kill Everlastings, except fusillade, a grass selective herbicide. So if your Everlasting site has predominantly ryegrass, or other grass weeds, there is hope! Use label recommendations to spray evenly over the crop. The sooner you spray the weedy crop the better, as there may be some implications to the Everlastings with any chemical spray. As mentioned, it is important to prepare your Everlasting site in the years prior. Monitor the weed burden and look to control the weeds so when you plant, there is not an overwhelming weed burden. Any weed that is allowed to grow, will not seem like much at the time, but one plant leads to 100s of plants, and soon the site will be exhausted by numbers. There is also the chance of a weed-seed bank in the soil. Weeds will come up in future years, even though you thought you had controlled them. Everlastings are not a strong vigorous plant, so weeds soon become dominant. This is why the plant is not an environmental weed. It is often a method to ‘tickle-up’ the soil, to aid with the germination of these weeds, having an even better chance of control. Do this by watering, gently raking and waiting 10 days, then removing the germinated weeds. Repeat if necessary.

Another method is to plant a legume as a break crop before seeding the Everlastings. This will add plenty of nutrition and nitrogen, and provide a different option for chemical control of weeds for the year, then plant the Everlastings. Perfect!